Parkinson’s Disease (PD) is the second most common neurodegenerative disease worldwide, affecting approximately 10 million people. In India, the exact prevalence of Parkinson’s is still undetermined due to lack of scientific literature, but it is estimated to affect around 1 million people over the age of 60. Parkinson’s is little known about and its symptom profile leads to it getting attributed to old age and cases remaining unidentified.This lack of awareness further adds to the problem of healthcare accessibility in a developing country. In India, the neurologist-population ratio is approximately 1 neurologist for every 200,000 population, with a majority (70-80%) practicing in urban areas.

Our model of care has evolved over the years to meet the healthcare challenges and set benchmarks. It is today, internationally considered as a model with great promise for other developing countries. We highlight the key features of this model here, and how it has helped us meet the challenges described above:

Taking Parkinson’s care to those affected has been a key objective for us in order to allay the problems of mobility faced by the population. Thus, we run community-based centres in more than 60 locations across India. These are run in fixed local venues which are disability – friendly such as religious institutions, educational institutions, community recreational and charitable centres and this eases the access of these centres to people with Parkinson’s and their caregivers. This feature makes the model replicable across the country, yet at the same time it is adaptable to fit the diverse cultural specifications of each location.

Being a complex condition requiring a myriad of rehabilitative interventions, we have focused on developing the model to encompass varied allied health services. At the helm of this is an internationally recognized, evidence – based written manual which has facilitated the education and rehabilitation of people with Parkinson’s and caregivers, as well as, the capacity building of allied health professionals specifically in Parkinson’s care. This multidisciplinary paradigm is based on the principles of physiotherapy, occupational therapy, speech therapy, psychology, neuropsychology, diet and nutrition, dance and movement therapy, yoga. Delivered in a group setting and under one roof, these sessions are cost-effective and the paradigm has enabled us in reaching out to people with Parkinson’s (PwPs) and caregivers to whom rehabilitative Parkinson’s care is not available.

The educational and rehabilitative services which are provided are based on established theories and fields; further researched, published and delivered by qualified professionals. This allows the content provided to be standardized and scientific, ensuring rehabilitation-efficiency. Moreover, this paradigm promotes evidence-based care to be replicated in a variety of communities, including those in low resource settings.

The patient – oriented services offered by us come at no cost to the patients and their families. This feature decreases the disease-specific challenge of affordability of a multitude of allied health therapies for a population that is encountering rising medical costs and age-related limited resources.

GROUP – BASED THERAPY (WITH INDIVIDUAL INDUCTION AND COUNSELLING)

Group – based therapy through weekly support centres forms the crux of our patient – oriented services. While making the programme cost – effective, it enables individuals from different walks of life to come together and share a platform to motivate each other living through a chronic illness. It encourages them to participate in their own rehabilitation and fosters an environment of learning and compliance. This set-up also promotes optimal resource – utilization which meets the challenge of inadequacy of allied health specialists for Parkinson’s care. The paradigm additionally facilitates individual counselling at the time of induction into the organization and individual consultation on a need basis. 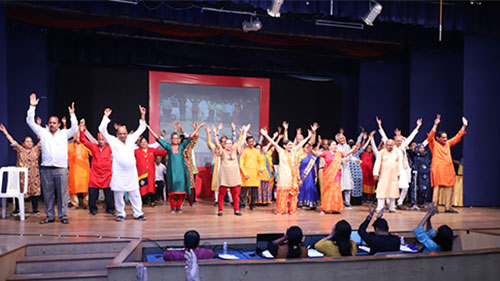